We must review our Planning Scheme every ten years to update provisions that respond to revised growth projections and changing economic or environmental dynamics. Nonetheless, during its 10-year life span, the Planning Scheme is considered a live document that will be refined and improved by rolling amendments occurring on average every 18 months – 2 years. Amendments not considered ‘administrative’ will involve public consultation in accordance with State legislation Ministers guidelines and rules.

The Whitsunday Planning Scheme was adopted on 3 July 2017 and has been amended four times to address various issues and remain compliant with the Planning Act 2016.

Council is addressing the following matters in the Proposed Major Amendment and Administrative Local Government Infrastructure Plan Amendment (the Amendment):

All requests needed to be scrutinized and changes made to the Planning Scheme formed the Amendment.

On 24 March 2021 Council endorsed the Amendment at the Ordinary Council Meeting to progress to State Interest Review, in accordance with the Ministers Guidelines and Rules 2020.

On 25 January 2022 Council adopted  the  policy  positions  outlined  in  the Council Meeting Report  in  response  to  State  Interest  Review (SIR) comments, and sent the altered Amendment (V4.2) to the State.

The State responded on 17 February 2022 with administration amendments, these were inputted into the Major Amendment and so the final is versioned V4.3. This version was sent back to State for Ministerial approval to commence public consultation.

The Amendment package comprises of the following items:

The steps for the Amendment are guided by the Ministers Guidelines and Rules 2020: 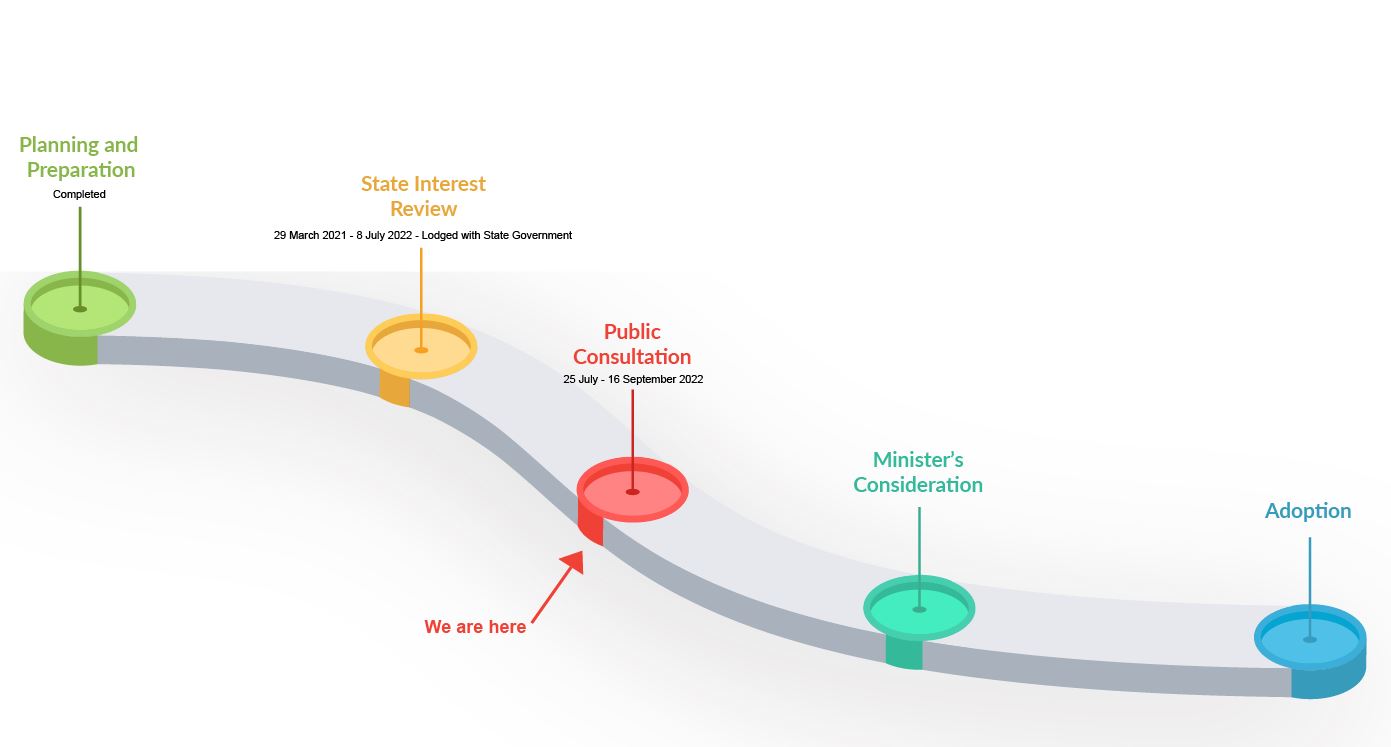 Disclaimer: Please note that the review phase and public consultation often result in multiple working version of documents these may not be updated online until a milestone above has been achieved.

The Interim Local Government Infrastructure Plan (LGIP) Amendment commenced on 30 November 2020, amending Part 4 – LGIP and Schedule 3.2.1 - Schedule of Works – Water of the Whitsunday Planning Scheme 2017, creating Version 3.7. The purpose of the proposed Amendment was to remove Water Reservoir (W8), located in Bowen South and applying to Catchment 2 - Bowen. The Amendment removes Water Reservoir (W8) as it is no longer required to meet anticipated growth of Catchment 2 – Bowen, within the next 15 years, subsequently improving Council’s cost and contingency values in the Schedule of Works.   See outcomes from consultation for this Amendment within the below Submission Analysis Report.

Elements of the Amendment:

The Alignment Amendment involved administrative changes that have the purpose and general effect of aligning the Whitsunday Planning Scheme 2017 to meet functions and terminology within the Planning Act 2016.

The Local Government Infrastructure Plan (LGIP), being Part 4 and Schedule 3 of the Planning Scheme, commenced on 29 June 2018. The LGIP governs the planning and development of future trunk infrastructure within the Whitsunday Region based on the projected economic and population growth. See outcomes from consultation for this amendment within the below Submission Analysis Report.

The documents were lodged with State on 29 March 2021.

To increase transparency in the process Council will make all formal correspondence between WRC and State Departments public.